Support energy transition
Compensate CO₂
Flight compensation
In Ghana, most villages in rural areas are not connected to the electricity grid, especially in the region around Lake Volta. The solar kiosks offer a cost efficient way of distributing solar lamps and solar home systems. Each one of them consists of 80 lockable compartments for customers. The graphic shows an improved solar kiosk, which has a bigger roof surface and thus offers enough space for the also bigger solar panel, which provides of 0.84 kW solar power per hour.
Kerosene lamps as well as torches with one-way batteries are widely spread in Ghana. For these batteries, there is no environmentally friendly way of disposal. The picture shows an older and smaller model of the solar kiosk. The compartments behind the light wood, offer space for charging customers’ solar lamps and phones. The black box contains the “piggy banks”, in which customers deposit coins in order to pay off the items.
The solar lamps from Sunhut are safer and brighter sources of light compared to kerosene lamps. Since they have a build-in rechargeable battery, they don’t generate waste while being used, as opposed to torches. On the photo, a customer just places an item in the lockable compartment, connects the cables and charges the solar lamp with the solar electricity produced during the daytime.
There is a daily fee for charging the phones and solar lamps. If customer wants to purchase their own solar home system, they need to deposit an extra fee into their money slot.
As soon as the customer has paid a certain amount, they get their own solar lamps as well as their own solar panel. This panel will be installed on the roof and can be used for daytime charging of electric appliances such as phones or solar lamps.
During the evening and the night, the solar lamps can be used as a light source for cooking and eating with the families but also for doing work, such as sewing. The lamps are mobile and can be used in the same way as torches, but they can also be attached to the ceiling using a hook.
Our partner Sunhut and Villgeboom decided, after a successful trial period, to work with women’s groups. All the coordination happens internally in these groups and they also collect the money from the solar kiosks. Just once per month a Sunhut agent visits the women’s groups to collect the money, to make some reparation and to answer questions.
Meanwhile, Sunhut has built repair shops across the country at which solar lamps and radios can be repaired for free as part of the warranty.

In many rural areas in Ghana, villages are not connected to the electricity grid and use either kerosene lamps or torches with one-way batteries to have at least some light in the evening. This is about to change with the solar home systems distributed via solar kiosks.

In 2018 atmosfair called for project proposals mostly for rural electrification projects. Villageboom and Sunhut were among the tender participants and convinced us with their simple but smart idea. They install solar kiosks in the center of very rural villages which are not connected to the grid. Each solar kiosk is equipped with a 300 watts solar panel on their roof providing 0.84 kW solar power per hour. The kiosk itself consists of 80 lockable compartments for charging the customers’ phones and lamps by using the solar power of the kiosk’s panels. At the back of the compartments they also have 80 money slots through which the customers are depositing their daily fee for using the kiosk.

Every new solar kiosk customer receives a second-hand rechargeable solar lamp and a key for their own compartment. For a daily fee, they can charge their phone and lent lamp. The goal is to convince the customers of the solar lamp’s advantages. Based on their experiences with the product they can decide if they want to buy their own solar home system, a small solar panel. If they decide to buy their own system, then they keep the second-hand lamp and make additional payments for a few months until they have paid off their own new solar lamp. Then, the second-hand lamp gets exchanged with the newly acquired one. Thenceforth, the customers keep making payments to purchase the remaining items such as solar panel allowing them to charge their lamp and phone at home, another lamp and either a radio or a power bank.

The kiosk is a slim sales channel being very cost efficient. An agent only visits the kiosks once a week to collect the payments, issue receipts, repair products and hand out the lamps, radios, panels, and power banks bought by users. 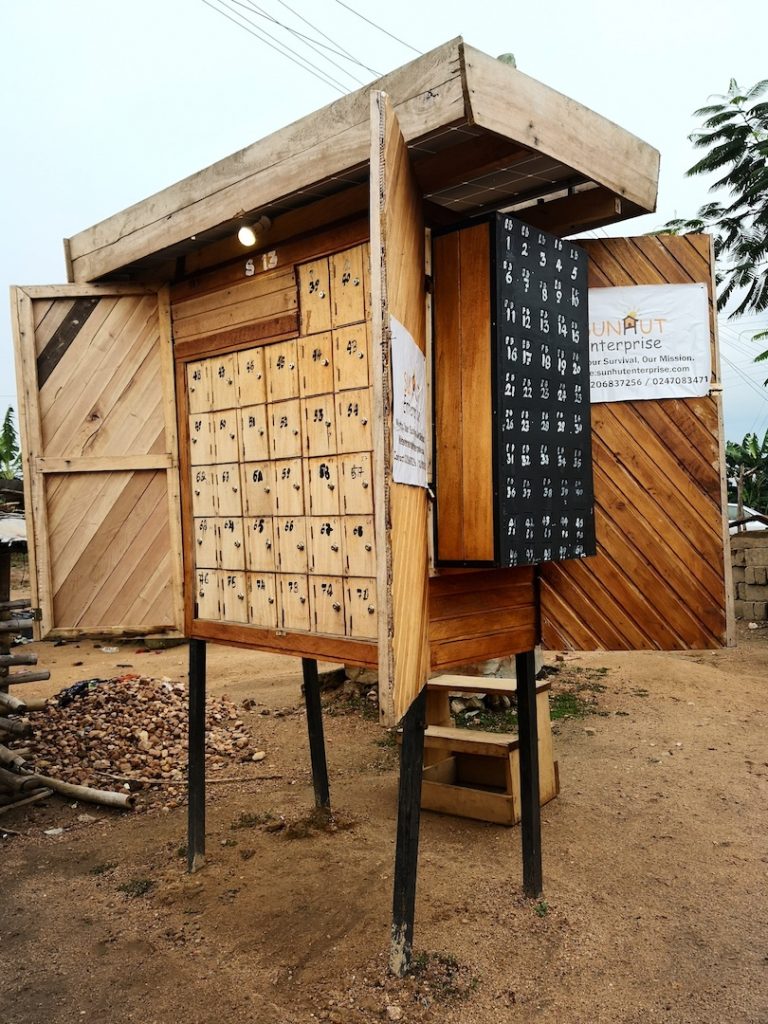 There is also a 6-week grace period for people that are late with their payments. After this period, people are assigned a money slot, where they can deposit money but can’t charge their phones or lamps. Once they are up to date with the payments, they are reassigned one of the normal compartments and can use the electricity for charging again.

As part of the project, some new solar powered repair shops have been installed, where trained workers repair broken items. There is also a 24-months-minimum warranty on all products sold by the solar kiosks.

This distribution system is a great solution to provide the necessary and cost-efficient infrastructure to sell solar home systems at low costs in very rural areas. It allows people to purchase the components for a solar home system step by step, while providing them solar energy to charge the lamp and the phone from day one.

As part of the cooperation between atmosfair, Villageboom and Sunhut limited, atmosfair provided funding for 15 new solar kiosks as well as for 1,500 Solar Home Systems which are being distributed among women groups. By financing those kiosks, the two partners received the necessary funding to get the business rolled out and to use the income to reach the goal of 200 solar kiosks all over Ghana.

In order to learn more about solar kiosks and to support the partners on site, atmosfair’s project manager Janine Adler visited Ghana to experience firsthand how the idea of using solar kiosks for distributing Solar Home systems is implemented. atmosfair conducted a local stakeholder consultation to receive feedback about the project from politicians, village people and NGO representatives. During this consultation atmosfair learned, that especially the Volta lake region in the eastern part of the country is very unlikely to get connected to the national electricity grid in the near future. Thus, atmosfair suggested to install most of the solar kiosks in this area. The representative of atmosfair also attended a sales event and had a look at the different generations of the solar kiosks, with and without agents.

There were also conversations about the future and discussions about which other climate-friendly products could be sold through the solar kiosks. atmosfair will start a pilot testing project with wonderboxes in Ghana. To distribute improved cooking stoves through solar kiosks is being kept in the partners’ back of their minds. As the distribution system of the solar kiosks is very flexible, it is easy to add new products.

Villageboom is a German social enterprise that has sold more than 100,000 Villageboom solar lamps in the past 10 years in many African and Asian countries and has worked with over 100 organizations. In this project they are collaborating with Sunhunt Limited, based in the Eastern part of Ghana. Sunhunt Limited builds the kiosks, markets, sells, and repairs the systems and takes care of the operational implementation and expansion of the project. 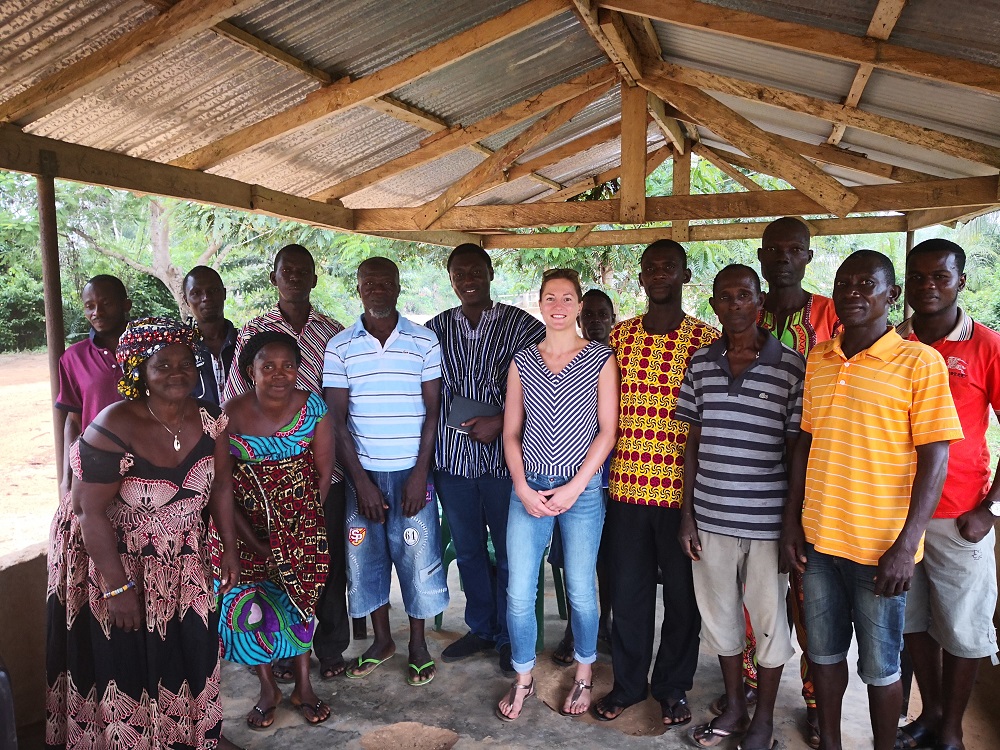 Support this climate protection project and many others with your donation.

News from the project