Support energy transition
Compensate CO₂
Flight compensation
The emission-free power plant is designed for the production of 3.5 MW of thermal energy, which can be converted into 1 MW of electric energy using the steam turbine.
Parabolic mirrors concentrate solar energy on a steel core, heating up water to a maximum of 450°C, which can then, under high pressure, be piped towards the steam turbine.
The power plant consists of 770 parabolic mirrors, covering a total surface area of 46,200 m². Electric energy provides the close-by ‘Brahma Kumaris Campus’ with electricity and community heating.
The power plant allows annual average CO2 savings of 1,000-3,000 tCO2.
At the workshop of ‘India One‘, parabolic reflectors and steel structures are constructed and maintained. 200 jobs for craftswomen and –men have been created through the local power plant.
The power plant is an important part of India’s development, moving away from carbon-based energy production towards low-emission energy consumption.
Photograph of the power plant from a close-by hill. 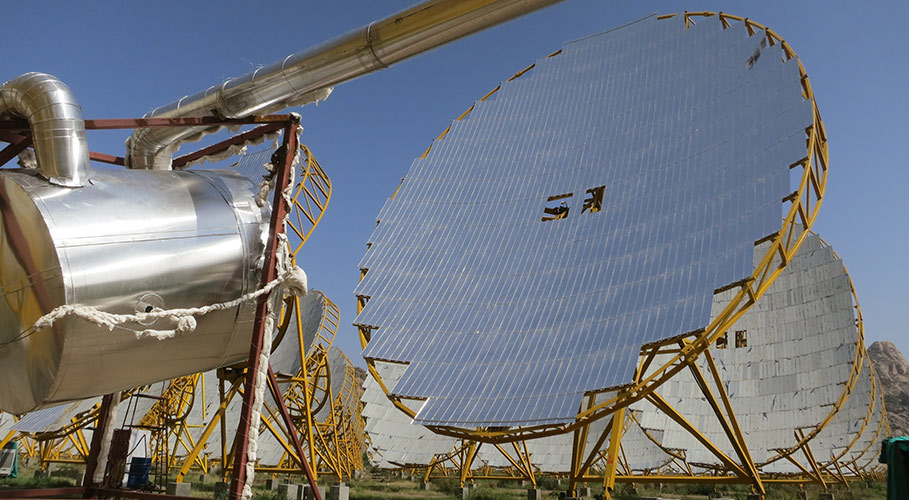 Coal is the primary energy source

Indias rapidly growing energy demand is largely met by coal-fired power. But even with the extensive use of energy from coal, energy supply is not secure. Many rural areas aren´t yet connected to the electricity grid and the metropolitan areas suffer from frequent power outages. To cope with the high energy demand and insufficient transmission infrastructure, solar energy becomes increasingly important. Research and development in solar heat and photovoltaic technologies are supported by the Indian government. Through frugal innovation, technologies are adapted to the Indian market.

For this purpose the World Renewal Spiritual Trust (WRST), a public charity and sister organization of the Brahma Kumaris institution, established a department of renewable energy technology. Since 1992 the trust has been developing and promoting solar technology. India One is the biggest project undertaken so far.

India One uses 770 in-house developed 60 m² parabolic solar dishes which are adjusted to track the sun. The concentrated solar rays are projected towards highly efficient cavity receivers in front of each dish. Each receiver is integrated into a heavy iron casting, serving as thermal storage. During sunshine hours the iron core of the receiver is heated up to a maximum temperature of 450°C. Water is pumped through the coil around the iron core receiver to generate saturated/superheated steam.  This steam is then transported to a heat turbine with a peak capacity of one megawatt. The static cast iron receivers are able to store the thermal energy up to 16 hours, allowing the plant to be operated 24 hours a day, also when there is no sunlight. The generated electricity and heat are used in the nearby Brahma Kumaris Shantivan Campus.

In contrast to other storage technologies requiring environmentally harmful substances to store the sun’s energy the steel can be melted when it is no longer used. Thus, the storage technology is more environmentally friendly than comparable solutions. Most of the parts of the plant were produced locally. Local production reduces costs and generates a new source of income for the region. The cast iron cylinders were produced in Gujarat and transported to the site. To increase awareness and knowledge of solar technology, nearby Shantivan Campus hosts trainings and workshops for local staff and interested visitors.

A project to promote technology, not for offsetting

atmosfair supported this project with your contributions with an amount of 30,000 Euros to promote the further development and diffusion of the innovative project technology. During the project duration, the power plant has saved around 1,000 tons of CO2-emissions. While atmosfair has monitored the emission reductions generated in the project, atmosfair does not use them for offsetting CO2-emissions. Since 2020, the project has been terminated for atmosfair and does not receive further funding from us.  But the power plant is still generating clean electricity, and it is visited by people from all over the world wanting to learn more about the use of solar thermal energy.

World Renewal Spiritual Trust (WRST) is a daughter organization of Brahma Kumaris. As a pioneer in solar technology, the engineers have developed the first large-scale solar kitchen 20 years ago – a technique that is now used all over India. The project “India One” has also been financed by the Federal Ministry for the Environment and supported by GIZ and the Frauenhofer Institute for Solar Energy Systems.

Project support by atmosfair is terminated. India One has received support from atmosfair for the new solarthermal and storage technology used for the power plant, which has proven its worth in the first few years of operation. atmosfair’s aim in funding the project is thus achieved.

03/05/2019: Our solar thermal power plant is running and provides energy for the nearby Brahma Kumaris Shantivan Campus. We will soon see the first verification of emission reductions for the project.