The energy transition needs you

The Paris climate goals and the global energy system transformation are lacking 700 billion euros of investment annually. Your contribution electrifies villages and gives people a perspective.
Support people and the energy transitition now

Where there was no electricity before, our solar kiosk provides “power to go”. Clean energy for everyone, our entry-level model for Africa.
Support energy in the global south now

The dung of two cattle in Kenya, India or Nepal is enough to supply a small farm with energy 24/7. Even without grid connection.
Support biogas and small farmers now

In rural areas, wood is still the main energy source for more than 60% of all people in the global South. Our stove saves 80% wood and money for users in Africa and Asia. And it saves smoke, too.
Support climate, forest and lung protection now

In order to keep the effects of climate change within sustainable limits, the participating parties agreed at the UN Climate Conference in 2015 in Paris to limit average global warming to well below 2° C compared to pre-industrial levels.

Most scientists argue that it is necessary to limit global warming to 1.5° C because, if the temperature rises above this, dangerous tipping points in the global climate system can no longer be avoided.

In a special report at the end of 2018, the Intergovernmental Panel on Climate Change (IPCC) calculated a global emissions budget of around 420 billion t CO₂ for a 1.5° C target from 2018 onwards. This amount applies to a scenario in which the 1.5° C target is reached with a probability of 67%. Unfortunately, an IPCC calculation for a higher probability of reaching the target (e.g. 95%) does not exist. 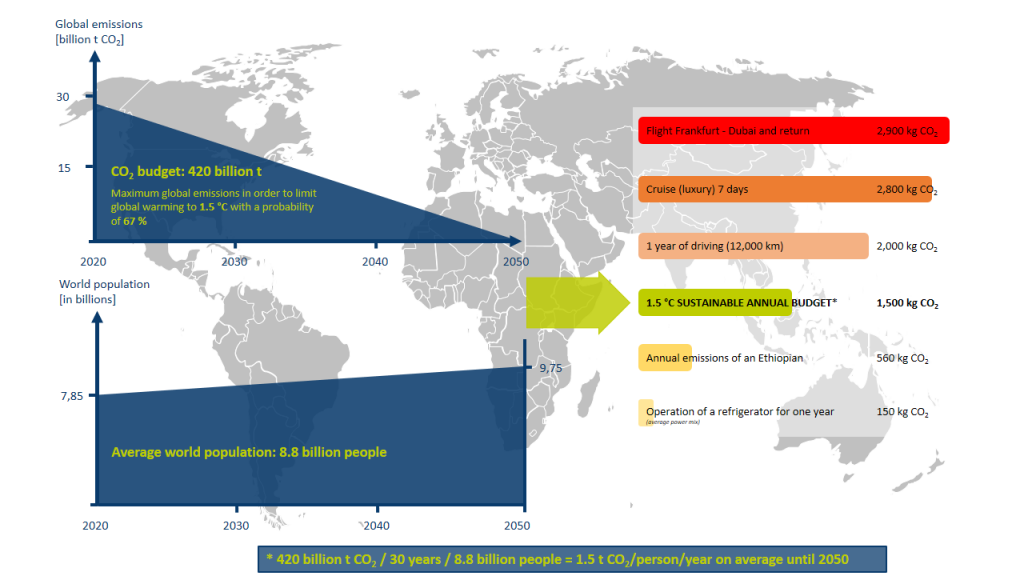 Yearly climate budget and activities of an individual

Calculation of the personal climate budget

If we assume, as many countries worldwide and the EU do, that the global economy has to be completely decarbonized by 2050, and with an assumed average world population of 8.8 billion people in the period from 2018 to 2050, this means that every person on this earth would be entitled to a climate-friendly budget of about 1.5 t CO₂ per year on average in order to reach the maximum warming target of 1.5° C. This average can be distributed irregularly, so that in the beginning, a person would have more than 1.5 t CO₂ annually, but later on, correspondingly less.