Support energy transition
Compensate CO₂
Flight compensation
The gasifier stove needs 50% less wood in comparison to traditional mud stove.
The people in the rural areas of West Bengal mainly live in basic mud houses.
The traditional mud stoves use a lot of wood and produce harmful smoke gases. In India particularly women and children are affected by respiratory diseases.
In comparison to traditional cook stoves, the gasification process creates a clean flame without smoke gases.
The new stove offers flexibility to the users. Once the TLUD is stuffed with wood, it burns down continuously. Meanwhile the users can do other activities.
During the pyrolysis process the wood becomes charcoal.
We offer the stove users to rebuy the coal produced in the stoves and sell it to seleceted coal users in the region, such as small restaurants or incense stick makers.
A charcoal chain was established in order to sell the charcoal to smaller companies and restaurants. Thereby, new jobs are created in the region.
Due to the wood savings and the additional money from the charcoal, the families can afford the schoolbus for their children.
The stoves are assebled on site by women of the region. Therby, additional jobs are created.
The Sundarbans in West Bengal are the world’s largest mangrove ecosystem. The dissemination of gasifier stoves helps to reduce the wood demand in the project regions.

In India, the forests have always been of great importance for the social, cultural and economic life of the people. Since time immemorial, people have used the forests as a source of firewood, fodder for animals, timber, etc. However, the rapid increase in population also increases the pressure on the forests. In some regions of India, up to 93% of the rural population, especially in poorer parts of the country, are still dependent on firewood for cooking.

The demand for firewood in India is higher than the supply of sustainable, renewable raw materials. This means that some of the wood used for cooking and the production of conventional charcoal comes from unsustainable sources. By introducing efficient stoves and replacing conventional coal, atmosfair reduces the need for wood in the long term and thus also the incentive for illegal logging and overexploitation of the forests. More wood remains in the forests, which counteracts the ongoing forest degradation in India.

Since 2012, atmosfair subsidizes the sale of highly efficient wood gas stoves that reduce firewood consumption by 50%.

The wood gasification stove uses the TLUD (Top-Lit Up-Draft) technology. It involves igniting dry biomass fuel (wood or pellets) on top of a vertical container, starting a pyrolysis process. As a pyrolysis front moves down, the wood gas produced moves up and, as it exits the furnace, is mixed with oxygen from the air and burned in a flame suitable for cooking. The TLUD allows significant savings on firewood compared to traditional stoves and also produces charcoal. 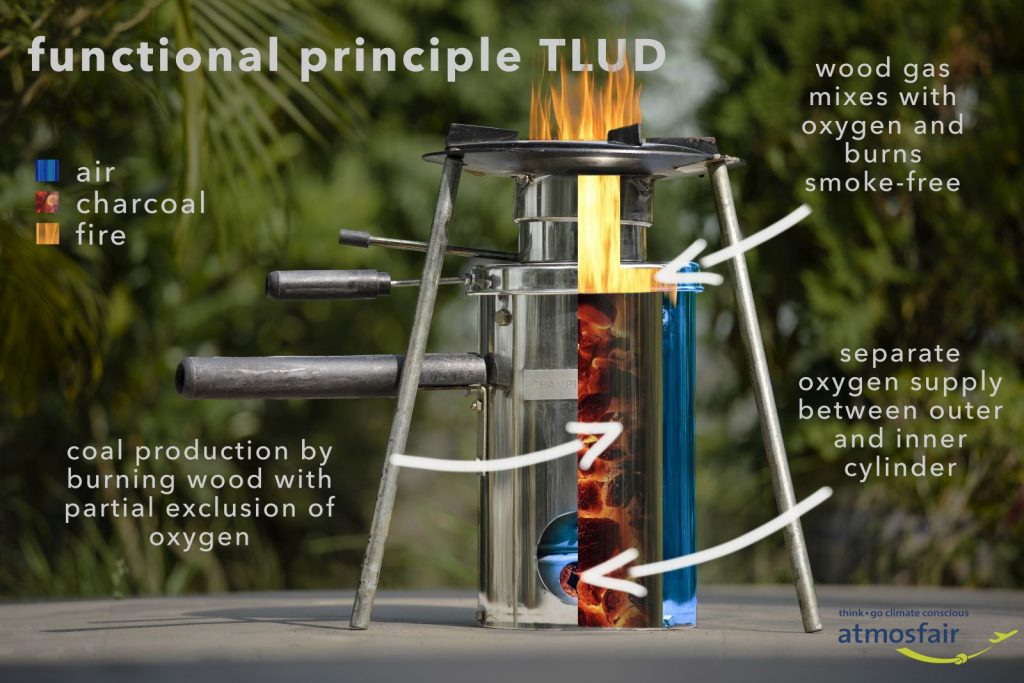 Cooking on a wood gas flame is just as comfortable as cooking on a LPG stove, with no smoke and a very stable flame. The process of wood gasification also generates charcoal as a by-product which can be used by the households or sold. The projects offers to buy the charcoal back from households and then provides it to users of conventional charcoal like barbecue restaurants, which allows for additional CO2 savings.

Due to the reduced expenses for firewood and the revenues from charcoal sales, households can quickly recover the expenses for the stove. This improves the economic situation of locals and simultaneously prevents the destruction of the Bengal Tiger’s habitat.

Support this climate protection project and many others with your donation.

News from the Project

December 2022
1000 additional Lions-stoves distributed to the users in India.

Functional principle of the TLUD