The atmosfair Advisory Board regularly discusses recent scientific findings in the areas of air transport and global warming. The board addresses two main issues:

What impact does aircraft engine exhaust have on the atmosphere, especially at high altitudes?

This question has been thoroughly answered through scientific research. The greatest contributors to global warming are CO₂ as a direct by-product of combustion, the formation of cirrostratus clouds and/or contrails (linear clouds), the formation of the greenhouse gas ozone in a sensitive level of the atmosphere, and the cooling effect of methane decomposition. 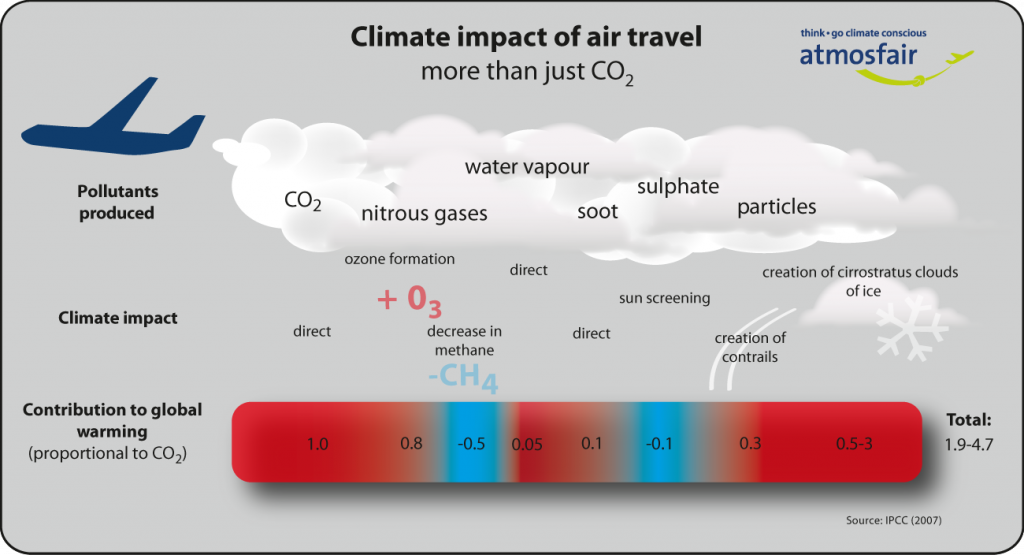 Climatic impact of air traffic and RFI-factor, based on IPCC (2007)

How can these effects be accounted for in the emissions calculation so that passengers truly understand the environmental impact of their flights?

While CO₂ is always produced and has a global effect over a period of many decades, ozone and cirrostratus clouds and contrails have a lifetime of hours or days. The atmosphere must be humid and cold enough to allow contrails to exist for several hours. Nevertheless, contrails drive local climate change much more than CO₂ does. This makes it difficult to compare all effects. However, in 1999, the International Panel on Climate Change (IPCC) established a method for this purpose. It focuses on the state of the atmosphere at a certain date (e.g. 2005) and is based on all past emissions since 1950. In this calculation, the average contrails from 2005 are accounted for, but those from 2004 are not due to their short lifespan. However, CO₂ created by a flight in 1950 is included in the calculation because a fraction of the CO₂ from a flight in 1950 is still part of the atmosphere in 2005. This method shows that the effects of CO₂, contrails, ozone, etc. drive global warming two to five times more than CO₂ alone. These results depend on the length of the time horizon. For example, a time horizon of 2010-2100 leads to different results than does a horizon of 1950-2005.

In any case, if only CO₂ is accounted for, the carbon footprint of air transport is distorted. atmosfair relates CO₂ to the other effects using an average factor of 3 in order to take the other effects into account; this is consistent with a recommendation of the German Federal Environmental Agency that was published in 2008 (in German).

Because contributions to atmosfair are voluntary, it is atmosfair’s belief that passengers should be fully informed about the ecological effects of flying as they are currently understood by the scientific community. Only on this basis can environmental awareness and climate protection grow and flourish.