On its way to decarbonising its operations, FlixBus has reached a new milestone: 1 July 2021 saw the launch of Europe’s first biogas-powered long-distance bus lines. atmosfair has been cooperating closely with FlixBus since 2017 and has provided technical support for the pilot projects from the very beginning. According to a preliminary CO2 emission calculation performed by atmosfair, the biogas-powered buses are able to save on average 75% of the CO2 emissions produced by comparable diesel busses.

Starting this week, passengers can travel the routes Brussels-Amsterdam and Stockholm-Oslo in a particularly climate-friendly way on buses powered by biogas. atmosfair supported FlixBus in sourcing biogas for the pilot projects to ensure that the buses operate as sustainably and climate-friendly as possible.

The pilot project in the BeNeLux region is a cooperation with bus manufacturer Iveco and gas company OG (OrangeGas). The biomethane or CBG (compressed biogas) powering the bus, is produced from sewage sludge in a plant in Amsterdam Westpoort. A product of wastewater treatment, sewage sludge is a very sustainable feedstock for biogas production from an ecological point of view.

The route in Scandinavia is served by a gas vehicle from manufacturer Scania. It runs on biomethane in liquefied form, LBG (liquefied biogas), supplied by Gasum. The Finnish state-owned company currently operates 17 biogas plants in Finland and Sweden processing various organic waste products. The geographical decision to pilot a biogas vehicle in Sweden is no coincidence, as the country is a clear pioneer in the use of biomethane in the transport sector. Moreover, unlike in Germany, the problematic use of energy crops in biogas production plays almost no role here.

Biogas as an available low-CO2 alternative to fossil fuels

The aim of the pilot projects is to find out how customers and bus partners react to the biogas buses and whether biomethane could be used as a short- and medium-term low-CO2 alternative to diesel vehicles in the FlixBus fleet. Apart from the fact that currently no existing gas bus model meets all of FlixBus’ vehicle standards, barriers include potentially higher costs as well as low awareness and low availability of sustainably produced biomethane in many FlixBus regions.

In order to support the testing of the technology, atmosfair will cover possible additional costs that bus operating companies may incur compared to diesel buses in the course of the pilot projects. This funding comes from the Future of Mobility Fund set up jointly by atmosfair and FlixBus, whose aim is to drive climate-friendly transformation in the mobility sector.

In any case, the two pilot buses will be a win for the climate. Preliminary calculations by atmosfair, based on manufacturer data on fuel consumption, show that the buses on average save about 75% of CO2 emissions compared to diesel vehicles. This calculation covers the entire value chain of the fuels including their production. 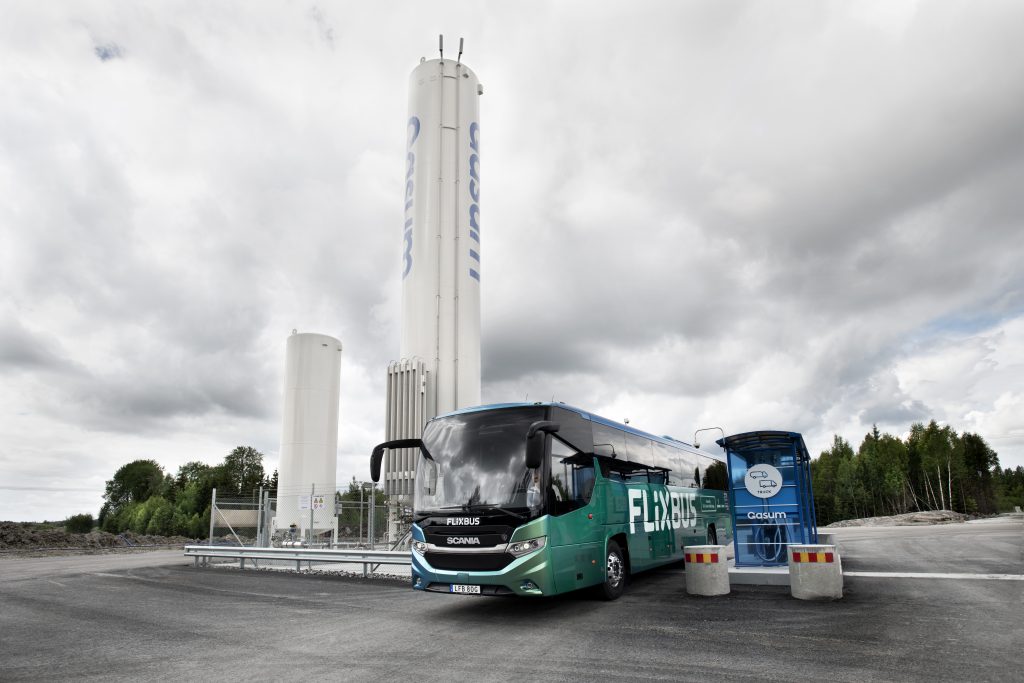 The piloting of biogas buses is another step towards the vision of a fossil-free FlixBus fleet. In 2018, FlixBus and atmosfair jointly put Germany’s first electric long-distance bus on the road. Since 2019, plans have also been underway for the world’s first hydrogen-powered long-distance bus, in which atmosfair and technology manufacturer Freudenberg are involved.

Due to the limited potential for sustainable biomass, a successful green transition of the transport sector will require extensive electrification in addition to demand reductions and modal shifts. However, due to the challenges of electrification in the heavy-duty segment, the use of biomethane here is a very good option to replace fossil fuels already in the short and medium term.