On 08.10.2020 at 8:03 a.m. the heart of the solar plant in the refugee camp Mam Rashan in northern Iraq was officially connected to the grid. Thanks to the new 532 kWh lithium-ion battery, the newly constructed solar mini-grid can finally provide the 7,833 internally displaced persons (IDPs) living in the camp with a reliable supply of clean electricity.

The camp is located in the autonomous region of Kurdistan, about 75 km from the city of Mosul. In the first half of 2014, the militias of the Islamic State brought large parts of this region under their control and spread terror and violence. Even if their original home has been recaptured by the Iraqi military in the meantime, many people cannot return home – the destruction is too immense, the poverty too great.

The solar mini-grid now supplies the 7,833 inhabitants of the refugee camp Mam.

Until now, the public grid supplied the refugee camp with electricity, but mostly only at night. During the day, the inhabitants only had access to electricity for about four hours a day on average. Temperatures of up to 48°C are no longer uncommon in the region. But without electricity, neither refrigerators, fans, nor light can run.

For this reason, atmosfair and the state of Baden-Württemberg, through the Stiftung Entwicklungs-Zusammenarbeit (SEZ), started a unique project in the refugee camp Mam Rashan in 2017: the construction and operation of a large solar mini-grid to supply the 1,900 residential units. Thanks to the commissioning of the lithium-ion battery from the German supplier autarsys, the solar system can now provide the inhabitants with almost continuous clean electricity. The battery is necessary to cushion the imbalance between the electricity production of the 980 kW solar system and the local power consumption. Without it, the operation of the solar mini-grid would be impossible. The solar system was expanded from 380 to 980 kW shortly before the COVID conditional lockdown. The entire system saves about 1,200 tons of CO2 per year, which would otherwise have been produced by the combustion of fossil fuels in diesel generators. 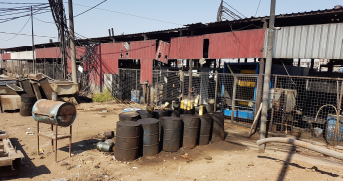 The privately operated diesel generators can provide some refugees with electricity - but at very high costs both for the environment and for their wallets.

In 2018, atmosfair installed – supported by the SEZ – a 360 kW solar system and a 120 kWh lithium-ion battery. However, it soon became clear that this system would not be able to completely cover the entire electricity needs of the more than 7,000 inhabitants. In addition, the engineers realized that not only the generation of electricity, but especially the distribution of electricity was a major problem.

Thanks to further support from the SEZ, atmosfair has increased the capacity of the plant to almost 1 MW last year, and has also built a completely new low-voltage grid. The local technicians have laid more than 11,000 meters of new cables and lines and replaced 1,980 sub-distributions to ensure a safe automatic switch between the national power grid and the solar island power grid.

1,980 old sub-distributions (left) had to be replaced by new ones (right).

Due to the COVID crisis and a strict lockdown in the autonomous region of Kurdistan, it was extremely complicated to coordinate and complete the work this year. But at the end of August this year, the time had finally come: the freight forwarder lifted the new 20-ton battery container onto his truck in Berlin and transported it by road and water to Mam Rashan. In September, the engineers Jörgen Klammer and Erich Klammer, who were commissioned by atmosfair, were finally able to fly to Erbil. There, they helped the local electrical engineer Nawar Aaena with the commissioning of the system. Currently, only minor remaining work on the new low voltage grid remains to be done and the project in Mam Rashan should be completed by the end of the year. 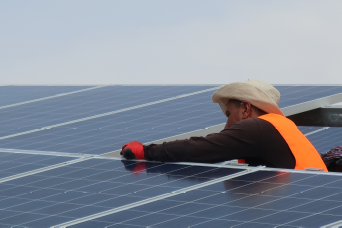 A local technician connecting the solar modules of the 1 MW photovoltaic system.

But there are many more refugee and IDP camps within a roughly 100 km radius of Mam Rashan, with hundreds of thousands of displaced persons who are still without regular access to clean, reliable and cheap electricity.

Many other local and international aid organizations have become aware of the enormous potential of using solar energy locally through the solar plant in Mam Rashan. Thanks to all the people who have actively participated in this project, it has now become clear that the transition to clean energy is possible and promising, especially in this sunny region. Specifically, atmosfair and the SEZ are already in talks with the United Nations High Commissioner for Refugees (UNHCR) and the American University of Kurdistan: they would like to build on the know-how gathered in Mam Rashan in order to consider possibilities, in partnership with government and other stakeholders, for developing solar energy infrastructure servicing nearby refugee camp in Domiz (where more than 30,000 refugees live) and the surrounding host community.

A big thank you goes to our donors, to the Stiftung Entwicklungs-Zusammenarbeit Baden-Württemberg (SEZ) for their financial support as well as to the involved engineers Jörgen Klammer, Erich Bosch and Nawar Aanea and our project manager Nele Erdmann! 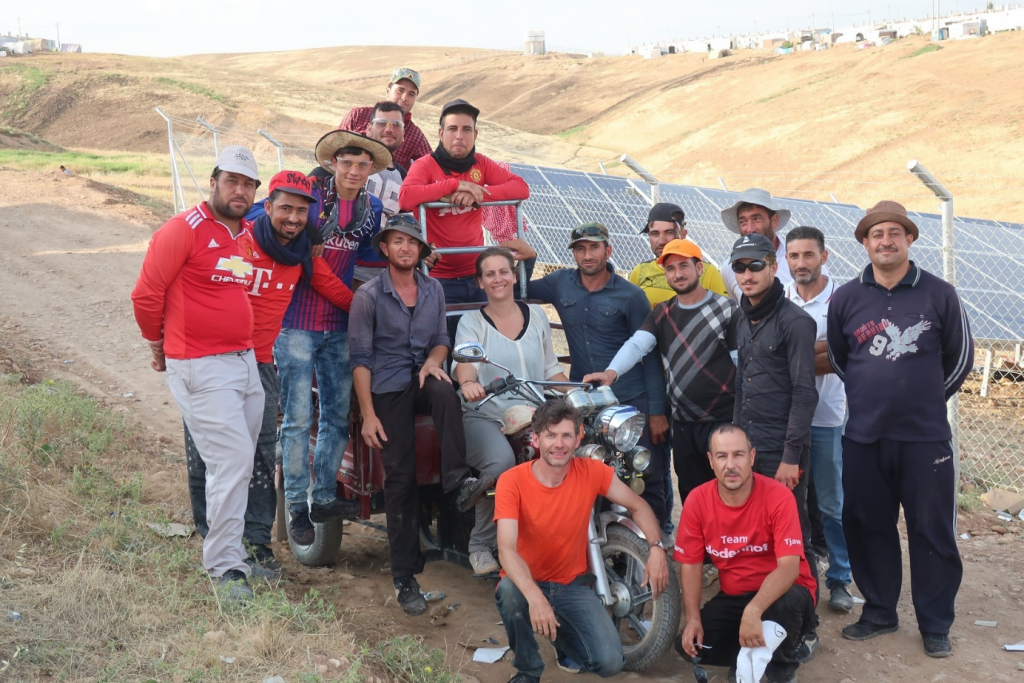 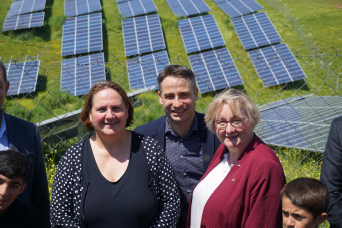 Delegation visit in April 2019 by Minister of State Schopper (left) with Minister Bauer (right) and SEZ Chairman Philipp Keil (center) in front of the new solar plant in Mam Rashan.